Once he had an interest in negotiation Derek started observing body language, many of these signals are given and perceived below consciousness, very powerful when you bring these into conscious awareness. He also read the works of Robert Cialdini, Master of influence – he had the opportunity of meeting Robert in Denver, Colorado.

Someone won’t buy from you if they don’t know, like and trust you.

Recommend you make a record of personal information about people that you may sell to – favourite football team, children’s names etc so you really get to know them.

Also to be interested and not interesting (ask about them, don’t go on about you.) part of the preparation is it to get into the frame of mind to make a person like us.

Cialdini and his experts found that’s if you gave somebody something it creates a sense of obligation to give something back. Might be as little is remembering their name, small freebie, coffee

Think what you can give first to increase the likelihood of a returned favour – buy a coffee, buy the first drink or expensive trip to a corporate event – the size of a gift doesn’t really matter though in these days expensive trips to corporate events are very much frowned upon (regarded as an attempt to bribe).

Derek likes to give a copy of his book – people don’t throw books away so it’s better than a business cardand it has value for the recipient.

Respect for authority can also be the cause of mistakes. it’s important that

Apparently 80% of people have clothes in their wardrobes that they don’t wear, bought because of fear

People often rush to do what others do

The 1964 Stanley Millgram experiment where people were brought in to an experiment where they were encouraged to administer electric shocks to an actor. 65% of those told by the ‘authority’ to give the shocks were led to do so to a level which would have killed subject.

Easier to say no at the beginning of the process, once agreement has been reached in principle, the
buyer is committed before the sale is closed.

‘Because’ is powerful – Ellen Langer from the Harvard Business School did some research which showed that compliance with a request is much higher when ‘because’ is included, regardless of what comes after the ‘because’. (compliance increases from 65% to 93%)

Andrew Henley is a barrister Derek met for coffee (on occasions when drinking coffee together was possible) – Andrew prepares for a hearing – goes into a semi trance as the jury is brought in – as he observes as they are sworn in, he is able to identify the 3 who will be the decision makers. If he is able to persuade them to ‘like’ his client and they believe the evidence, the chances of either a reduced sentence or a finding of ‘not guilty’ are much improved.

‘Authority’ can have two routes:

She also confirmed that for reciprocity to work, the values of what is given/received in return do not have to be equal.

She uses the mnemonic OAP

Gabrielle also uses anchors – asks questions to illicit a negative state and anchors that (with an expression, voice tone and/or touch), then does the same with a positive state. She then uses the appropriate anchors to underpin her proposition.

Derek talked about perceptual contrast, giving the example of a restaurant wine list. If the first wine listed is £35 a bottle, that looks expensive. If, however, the first on the list costs £60, £35 looks less expensive.

Also using the power of three (three examples, the middle is the one expected to sell). The restaurant Carluccios used to list a Vespa scooter as the first item on the menu at £3500.. With the same effect at the 60 bottle of wine.

Waiters get bigger tips when offering 2 candies rather than 1 with the bill.

JC Penney used to price at $?.99. when they changed to pricing to rounded (whole) dollars, sales dropped by 30%

Yes tag questions also helped – when a salesperson uses something like, “You will let me know if I can help you, won’t you?” there is an increased chance that the browser will speak to them later.

Gabrielle advised her daughter (when she started working in a restaurant) always to offer a slightly cheaper wine – this resulted in a bigger tip – the customer feels looked after.

Stories around “Just sold one of these to…” and online sellers use, “People who bought this also bought…..”

Martin shared one of the stories from Robert Cialdini which illustrated the long lasting effects of reciprocity.

More than 170 years ago in the time of the potato famine, the US Choctaw nation sent money to Ireland. In recent days, the link between the Irish and Native Americans has seen some $1.8 million sent to the Navaho and Hopi nations who are challenged by Covid 19.

Derek referred to internet hotel booking sites who use:

Cialdini’s discoveries are very effective and summarized in both of Derek’s books.

It is easier to say, “No” at the beginning of the sales process than at the end.

Tony said he had found the meeting very interesting (something about the difference between what is seen and what is heard?)

This can be seen as manipulation, we are all being influenced all the time, including by ourselves – consider what radio TV and other media we tune into, especially in the current times, these are powerful influencers and we can be getting depressed as a result of the current news.

He recommended making people feel good for no reason. Feeling better has a positive effect on the immune system.

Derek added, “Go out and ruin someone’s miserable day by cheering them up”.

Opra claimed the secret of her success was to stick to radiators and stay away from drains.

Beverley picked up an earlier point (double glazing salesman applying all these principles but in a very heavy-handed and extreme way). She had explained to a dg saleman that her husband was making windows as they spoke. He wouldn’t listen, so she invited him into the house and through to the garage where her husband was indeed making windows…..

Martin told of a young man who spoke to him while he was washing the car on his drive. When the enquiry about replacing his windows as declined, the young man asked if he believe in Jesus – it transpired he was both a double glazing salesman and a Jehovah’s Witness.

There was some debate about lying and getting caught out – examples given from the UK and US where it seems there were no consequences to politicians found to be telling lies.

Decisions are based on the best evidence / truth – it’s 5 times more difficult to lie.

Godfrey’s point from the Top Tips show was revisited re the value of asking questions to which youalready knew the answer in order to calibrate the other person’s response.

Below are the key links to our educational resource library. 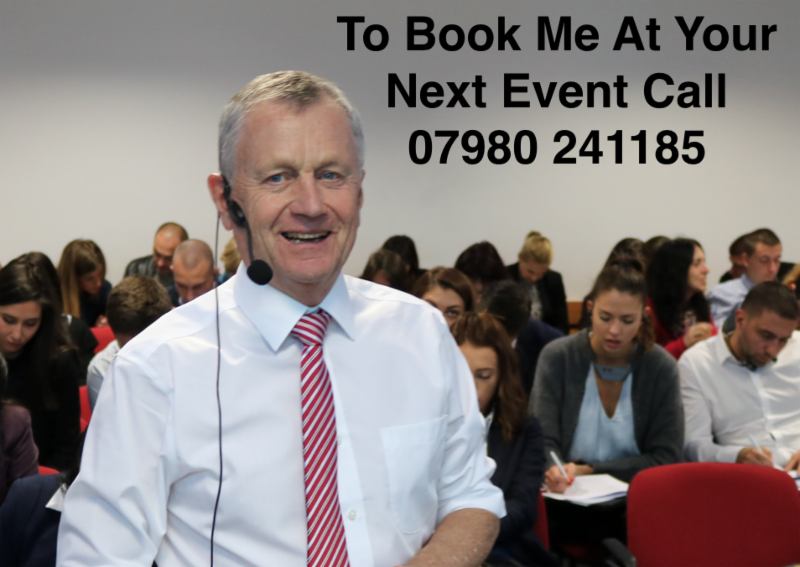 Derek has been voted the #1 Negotiation Speaker in the UK by a Professional Speakers Association survey.
Awarded the “Founders Award” for inspirational business speaking.
Best selling author of twelve books, MC, coach and masterclass leader.
Have a fantastic weekend and very best wishes for your success